Your body/brain has an incredibly complex and detailed communication system designed to keep everything working smoothly no matter what’s going on. Hormones are its chemical messengers that tell every cell, organ, gland and system in your body what and how much to do. They are made by endocrine glands and secreted in precise amounts into your bloodstream as directed by your central nervous system.

The chief controller of hormone production is your hypothalamus, a brain area that regulates all physiological systems to maintain internal balance (homeostasis). Using feedback loops throughout your body and brain, your hypothalamus continuously monitors changes inside and around you, including thoughts and emotions. It responds by initiating hormonal adjustments that allow you to adapt to the changes and maintain or regain homeostasis.

To do this, a hormone message goes from your hypothalamus to your pituitary, the master endocrine gland, instructing it to send a demand to the appropriate endocrine gland to increase or decrease production of specific hormones.

The adrenals are the main glands of stress because they make all of the major hormones involved in stress response and adaptation. During stress the hypothalamus gets the adrenals to produce specific hormones via two pathways:

2) Hypothalamic-pituitary-adrenal (HPA) axis – adrenocorticotropic hormone stimulation of the adrenal cortex by the pituitary to make cortisol, aldosterone and other corticosteroids for more prolonged stress adaptations.

Adrenalin (epinephrine) is the primary “fight or flight” stress hormone produced in the adrenal medulla in response to stimulation by the sympathetic nervous system. Its effects are short-lived and prepare your body for immediate action by quickly getting more blood, oxygen and fuel to your muscles. To do this, it increases heart rate, blood pressure, breathing rate, and circulating glucose and free fatty acid levels, while dilating blood vessels in skeletal muscles and liver but constricting blood vessels to other areas of the body not essential to the fight or flight response. A jump in adrenalin gives you that panicky – butterflies in your stomach – sweaty palms feeling.

Noradrenalin (norepinephrine) is another “fight or flight” stress hormone produced in the adrenal medulla and as a neurotransmitter in the sympathetic nervous system, stimulating alertness and concentration. It is very similar in action to adrenalin but constricts almost all blood vessels, increasing blood pressure.

Cortisol is the stress hormone with the most widespread and long-lasting effects throughout the body. Produced primarily by the adrenal cortex in a diurnal cycle (approximate 8 AM high and 1-4 AM low) and in response to stimulation via the HPA axis during stress, it is a steroid hormone classified as a glucocorticoid because of its regulatory role in blood sugar (glucose).

A considerable amount of cortisol activity in your body is also produced by the enzymatic conversion of inactive cortisone into cortisol within cells, especially fat cells. Cortisol helps sustain stress response alterations initiated by adrenalin/noradrenalin, including maintaining increased blood sugar. However, it has many other physiological effects and influences the activity of every cell and many of the other hormones.

Among other things, it is a powerful anti-inflammatory and suppresses overall immune function; increases stomach acid secretion; slows digestion; reduces tissue (including bone) growth and repair; increases fat storage; affects memory, concentration, mood and sleep; is essential for proper thyroid function; and acts as a diuretic and prevents sodium loss. These effects are usually adaptive when the stressor is relatively short-lived but when stress is prolonged or chronic they can become destructive.

Aldosterone is produced by the adrenal cortex in response to stimulation via the HPA axis during stress, or a drop in blood volume, blood pressure or plasma sodium concentration. A steroid hormone, it is classified as a mineralocorticoid because of its influence on sodium/potassium balance. Aldosterone regulates water and electrolyte balance in the body and plays an important role in blood pressure, volume and pH maintenance. Through prompting the kidneys and colon to reabsorb sodium into the bloodstream and excrete potassium into the urine, aldosterone causes water to be retained.

Dehydroepiandrosterone (DHEA) and its sulfated form Dehydroepiandrosterone-sulfate (DHEAS) are steroids made in the adrenal cortex, but a small percentage is also produced in the brain and male testes. DHEAS can be reversibly converted into DHEA in the adrenals but typically circulates in the body as DHEAS. Levels are low during childhood and middle to old age but high through adolescence and early adulthood.

Acting as an antagonist of cortisol, to some degree it counteracts the effects of elevated cortisol on blood sugar, insulin, fat storage, bone, memory, mental function and the cardiovascular system. One of its primary functions is as a precursor to making about 50% of androgens (male sex hormones) in men, 75% of estrogens (female sex hormones) in premenopausal women, and 100% of active estrogens after menopause. Although the most abundant steroid hormone in the body, the role DHEA/DHEAS plays in health and stress is still not well understood.

Testosterone and estrogen are sex steroids primarily made in the gonads (testes in men, ovaries in women). But they are also synthesized in smaller amounts from androgens produced in the adrenal cortex. The adrenals are the main source of testosterone in women, and after menopause and andropause, become the primary source of testosterone and estrogen for both sexes. Proper adrenal function is essential for sustaining adequate sex hormone levels in later life.

The thyroid gland regulates metabolic rate through the action of the hormones it produces, thyroxine (T4) and its more active form triiodothyronine (T-3) in response to pituitary stimulation by thyroid stimulating hormone (TSH). A certain amount of cortisol is necessary to sensitize thyroid receptors to thyroid hormones, but high cortisol levels can suppress the production of TSH, decrease the conversion of T4 to T3, and increase levels of reverse thyroid hormone (rT3), which blocks cell receptors to T3. Because of this close relationship, stress and adrenal function have a significant impact on thyroid function. 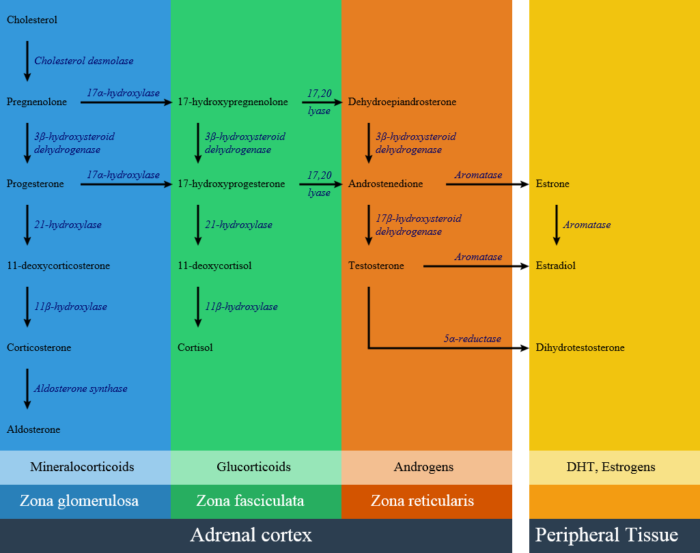 Visit Our Blog
This site uses cookies: Find out more.